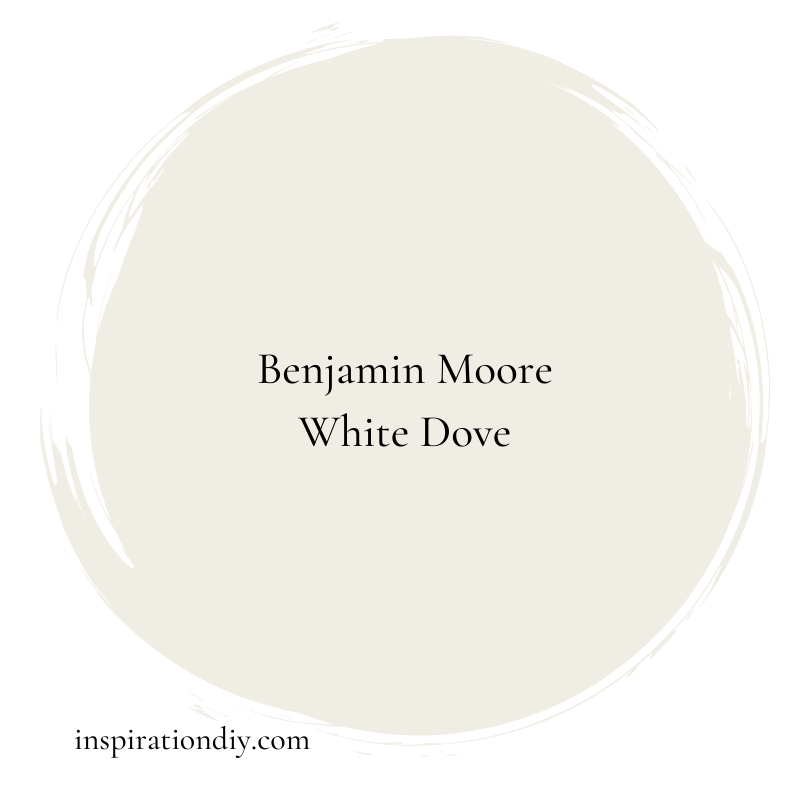 Timeless, classic, and elegant – these are the words that jump to mind to describe Benjamin Moore White Dove. It’s a paint color that brims with unerring taste and style, making it one of Benjamin Moore’s best white paints, and one of the most sought after hues in the company’s catalogue.

Further, let’s look at why it’s so unique and what sets it apart from all the other whites.

Benjamin Moore White Dove is a shade of off white. It has gray undertones, and just a hint of green, too. While the color looks almost taupe on the color card or a computer screen, White Dove can almost read as a true white with a touch of depth in bright rooms, and like a creamy ivory in darker ones.

Benjamin Moore describes the shade as ‘a clean and classic white.’

What is the LRV of White Dove?

Now, White Dove has an LRV (Light Reflective Value) of 83.16 out of 100, which solidifies its position as a softer shade of white (the starker shades begin to start around the 90s). When you look at it, your eye won’t be overwhelmed with an abundance of immediate light reflection. Instead, you’ll feel a nice, downy visual suppleness that won’t hurt your eyes a single bit.

If you’ve never heard of LRV, I’ll explain. It’s worth knowing because it makes paint colors so much easier to evaluate, especially if you’re choosing between two similar shades.

LRV measures the light reflectiveness of a color. It’s measured on a scale of 0-100, with 0 being the blackest of black paints, and 100 being a true white. Generally, paint colors range between a two or three LRV, and a 93 LRV, since there isn’t a true white or true black paint color.

Is White Dove Warm or Cool?

Benjamin Moore’s White Dove is a warm, creamy white, because it consists of very muted green undertones. To the naked eye, these undertones may be non-existent, but they will appear stronger based on the other colors and lighting in a room.

Benjamin Moore describes White Dove as a clean and refined shade of off-white. It’s urbane, classy, and certainly shies away from creaminess or yellow blowbacks. Instead, it a color that meanders into the beige-meets-white lane and sets itself apart by being really easy on the eyes.

The crispness of this white translates really well into spaces. It’s neither too bold, nor too bright – instead, it’s a rather soft approach to the color white that will make you feel like the walls of your rooms are a canvas that you can customize with no limit.

Comfort aside, White Dove has subtle warm-hued undertones that don’t really pair well with colors that have even a hint of pink in them. It does, however, go really well with bold, cool colors that have a solid presence. White Dove-ed trimming with a navy blue accent wall would be a total winner.

Strictly speaking, this particular shade of white by Benjamin Moore has a bit of warmth in it, but most of it is rather muted. Until and unless you’re really, really sensitive to yellow, you won’t really feel it.

Where to use Benjamin Moore White Dove

White Dove by Benjamin Moore is a very flexible color. It’s snowy softness is not simply reserved for chic rooms – you can also play around with it on your wall trims, cabinets, and more. It has the ability to work well with most colors, especially if you have a keen eye for warm and cool hues. It can also be used to accent spaces that have been dressed to impress in charismatic colors like juniper and navy.

How you choose to interpret this color in your spaces also depends on the kind of lighting that you’re setting it up in. For example, if you’re furnishing it in a room with lots of south-facing, super-bright sunlight, then it’s going to come off as cheery and warm. This means that you cannot have any pinkish undertones in that room, or it will seem off-putting. On the other hand, if you feature White Dove in a room with understated, north-facing light, you’ll be able to tap into its cooler side.

If you’re considering an all-white application of this hue on your walls, then you really want to check the undertone of your floors. If there’s even a hint of pink in it, then it’s not going to work out. And we’re not talking about the typical in-your-face kind of pink. See, every color, even if it’s a shade of beige, has an undertone (be it red, violet, green, etc.). So if your preferred beige carpet with pink undertone is paired with a room that’s finished in White Dove, then your floor is probably going to look dirty. However, if your beige has yellow-ish undertones, then it’s going to complement the warmth of this paint color pretty well.

Other than that, if we talk about the kind of interior design style that White Dove goes with, then you have quite a bit of variety. It can pair well with the understated earth tones of a rustic or boho-chic space. It can also go really well with the inviting splendor of a coastal, contemporary, or transitional style interior design themes.

Pro tip: Always keep in mind that Benjamin Moore’s White Dove will definitely play positive on its warner side if you accessorize or furnish with cooler undertones like grey. It would look yellow-ish when paired with starker whites as well.

You can carry out a lot of unique combinations with White Dove, and here’re just a few that can show off its visual versatility:

What paint is similar to Benjamin Moore White Dove?

Benjamin Moore’s Oxford White is perhaps one of the closest shades to White Dove. It has an LRV of 86 as compared to White Dove’s 83.16, so it’s a little bit cleaner and crisper than it.

In fact, the company describes it as a “classic bright white with a cool cast” so if set against White Dove, it can highlight its muted, creamy undertones.

Other Benjamin Moore colors that are similar to White Dove include Steam, Swiss Coffee, and Vanilla Milkshake.

What is the color code for White Dove?

The color code for Benjamin Moore White Dove is OC-17, but it is also known as PM-19.